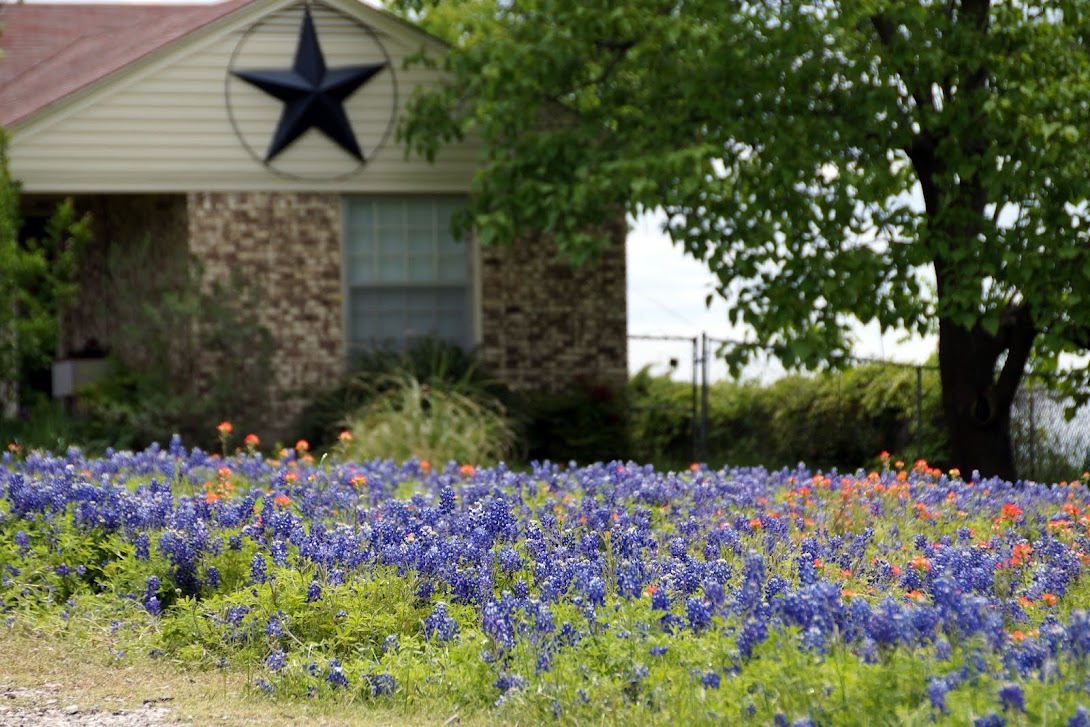 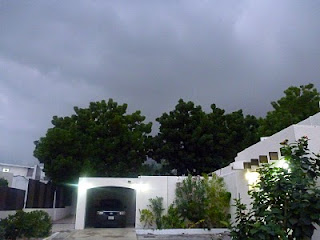 Ahhh...the rainy season in Oman.  It is generally hot here but this is the rainy season, short as it might be, and the other day clouds rolled in and it rained. It was a  wonderful rain. The sky had a very threatening look to it and being from Texas, I did expect some thunder and lightning. But all it did was rain. I have been told that the real rainy season is yet to come so maybe this was just a 24 hour teaser. The wadis, or dry riverbeds, are all over and when it rains even a modest amount, these wadis fill with water that runs down off the rock mountains that surround the city.

Today it's a gorgeous day and I may take a drive to one of the wadis and see if there's any transformation as a result of this rain. The mountains look the same, but they are solid rock, so there is no real greening of them from rain.  I took this picture from the end of my driveway...the front door is just under those pieces of wood sticking out on the right. It was about 4:00pm when I took this...my outdoor lights even came on because of the low light.

Just another pleasant surprise in this middle eastern country...rain. We take it so much for granted yet in some parts of the world it is a blessing.

Happy New Year! My new laptop finally arrived and after much consternation, I now have reliable internet. It's a new year and things are just wonderful here in Muscat, Oman.  I love my life!!

I had a terrific Christmas.  My friend, Sally, who I worked with in Honduras, flew in from Sarajevo on December 23 and we had 8 days of fun in the sun, being tourists and discovering amazing things in and around Muscat.

The first day we had brunch at the Grand Hyatt...it was delicious. We also did some shopping and I kind of showed her around Muscat. Saturday we went to the Grand Mosque, the Sultan's gorgeous mosque here. The picture doesn't really show how amazing the chandelier is, which is 46' tall and 16' wide.  I've seen many photographs of it and none really show its beauty. This is definitely something that you have to see to appreciate the beauty and enormity of it all.

The next day, we put on our bathing suits, grabbed our snorkeling gear and headed down the carriageway (aka highway) towards Al Sawadi.  Al Sawadi is a beach resort and they offer day trips for divers to 2 islands, about a 45 minute boat ride from shore.  There were about 16 of us and we were the only 2 snorkelers, or top water bobbers as I like to refer to myself.  I tried snorkeling for the first time while living in Honduras and can honestly say I wish I had learned this earlier in life! The beauty that lies just below the surface of the water is unbelievable!  Al Sawadi beach is beautiful and we saw some amazing stuff... the first island even had a beautiful white beach. We were in shallow water, about 8', and it was so clear.  The fish didn't seem to mind us swimming above them at all.  The only problem was that they wouldn't stay still when I wanted to take their picture!

The next day we headed toward Al Naseem camp, with a side trip to Ras al Jaz. This is along the coast of Oman. The plan was to spend the night in the desert in what could be best described as a hut with lighting.  Then, that night, along with several other campers, we would drive to
Ras al Jaz, the beach area, about 10 minutes away and see the giant sea turtles as they laid their eggs and hopefully see some baby turtles.  We arrived at camp, which is set up pretty much like a Bedouin camp, around 5:30pm.  We were assigned to Hut #14.  Yes, it was just as it looks in the picture above.  The outdoor sinks added a touch that only a desert camp could (note the reflection in the mirrors).  Ali, our fearless leader, asked us which group of turtle watchers we wanted to be in. I asked what our options were...he said evening or morning.  And the times would be....9pm and 3am.  Sally and I looked at each other (thankful we were the first to arrive and had options) and immediately said 9pm would work!  Fast forward to about 9:30pm...we are walking on the beach in a group of about 20 others, no flashlight and doing our best to not fall in any of the many many large holes made by mama turtles previously. I was told it would remind you of a battle field and it did, what I could see. Several times, I nearly fell in a hole!  The only one with a flashlight was the guide. We saw 3 wonderful sights.  First, we saw a huge turtle in the hole, using her flippers to throw sand backwards, covering her eggs.  After she does this, for about an hour, she digs a second hole about 4 feet ahead of the hole where she laid the eggs.  This is a decoy hole, which she hopes the many predators will look and not go after her eggs. It was something to stand there and have sand thrown back at my legs by this 50 year old turtle.  We then walked further down the beach, still in the dark, and we were directed to another very large turtle in her hole.  We moved to the back side and watched as eggs dropped out of her into the hole, looking very much like ping pong balls.  I have no pictures of this as no cameras are allowed.  We were warned that if anyone took a picture, their camera would be confiscated. At this reserve, they do everything possible to avoid spooking the turtles, including threats of losing your camera. We went on the move again, this time to a spot in the sand where another guide was gently moving the sand around.  Within minutes, baby turtles popped up through the sand and started trying to move around. This was a location where babies had emerged the previous night and since the eggs are in layers, the babies hatch and come out in stages.  They were so cute!!  This is an experience everyone should have and I'm so glad I saw this.  These baby turtles have such a slim chance of making it to the water without being eaten and even once they get to the water, other fish go after them. It's no wonder this turtle is nearly extinct.

We left the following morning, looking forward to our beds back at the house! The sunset was beautiful and so was the early morning, as we watched the sun rise from behind the clouds.
We headed back to Muscat and onward to Nizwa.  It's not a bad drive, through the desert and over the mountains. There is a very large fort there as well as a souk, or marketplace. The fort was a bit of a disappointment because much of it had signs and things enclosed in glass cases. The other fort that I have been to here was pretty much left alone and you could really enjoy it and get a feel for it.  We did go up into the tower, which opened into a huge area.  That part felt realistic!  And the view from the top of the wall the view was incredible.  You would never think of the desert being beautiful but this area is so covered in palm trees and white buildings, then you add the mountains in the background....gorgeous! 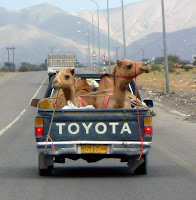 I'm not sure when, but as we were driving along the highway, we saw a sign.  Ahhh yes...camel territory!!  Both of us had this huge desire to find a camel, take his (or her) picture, pet them and if by chance we got to ride one...fantastic!  So when we saw the sign, we got all excited and giggly!  Sally had her camera in hand and we started looking for large 4 legged animals.  We would see one in the distance and then we'd see 2 or 3 together.  But when the car in front of me pulled out to pass a pick up truck, we struck gold!!!  We were shocked and started laughing so hard I almost drove off the road!  We both grabbed our cameras and started taking pictures.  The guy pulled to the right a little so we could pass but we weren't ready to pass yet!  We had 2 camels in the back of a Toyota pick up in front of us and we were going to enjoy the sheer sight of it for as long as we could!  Our sides hurt from laughing after this little episode, and we were still seeing camels!  They seemed to be everywhere.  We wondered what happened if they decided to cross the road...and we found out!!!

Cars were driving by, some slowed down and a couple honked.  But this guy just sauntered across the road and gave everyone the "come and make me move faster" look.  Way cool.

With all the camel sightings, the best was yet to come.  We were just outside of Muscat when Eagle Eye Sally happened to look to the right at just the right time and saw what appeared to be hundreds of camels!  I exited the highway at the first opportunity and tried to find our way back to these camels. After one set of military-looking guards waved us off, we managed to sneak around on another road and in mere minutes, we were eye-to-eyes with CAMELS! As we got out of the car and walked toward the enclosure, we held up our cameras and got a nod of approval. In just a few minutes a man in uniform came over and introduced himself and asked if we wanted to go inside the enclosure. A big yes!  As we were snapping pictures, a second Omani in uniform came over and we were then asked if we wanted to have a ride on one of the camels. You would have thought Sally and I became 9 year olds! We were so excited. Sally went first and then it was my turn. I climbed on the back, behind his hump and before I could grab hold of fur, he started to get up and I did a back flip, landing on some very nice soft sand on my butt!  No harm done...I got up and climbed back on and  leaned forward, into the hydraulic-like movement a camel makes to get up from a laying down position. What fun...

So, life in the Middle East is not all sun and sand.  Sometimes you get lucky and it includes a ride on a cute faced camel!  Stay tuned...I have 18 more months here and am determined to seek out more thrills and excitement! 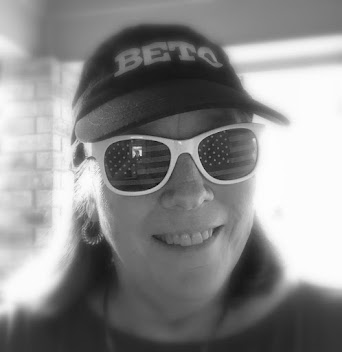